It was a break-through moment.  My dad and I had persevered for close to a year, gently trying to help Bailey overcome his abusive past.  To that point Bailey had exhibited fear and oftentimes aggression if anyone other than me came too close.   That Sunday dad arrived for his routine visit and sat down in his usual place on the couch. Bailey boldly jumped up next to him. Then, he did something he had never done before—he laid  down with his front paws overlapping my dad’s leg, anticipating a treat. We rejoiced, as it was the first time Bailey had ever intentionally touched my dad. 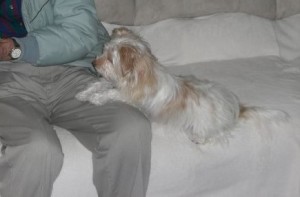 From that day on, Bailey only continued to improve. In the six years since his adoption, he has changed from an abuse-scarred animal into a loving, well-behaved, handsome fellow—in short, the perfect pooch for our family. Now when we go to my dad’s house for a visit, Bailey can’t wait to tear through the door and run straight for my dad, who is usually sitting in his recliner. Bailey takes a flying leap into his “granddad’s” lap and my father delightedly exclaims, “Well, hello, buddy!” When family visits from out of town, Bailey is in doggie-heaven. He makes the rounds, moving from lap to lap to receive the maximum number of tummy-rubs. 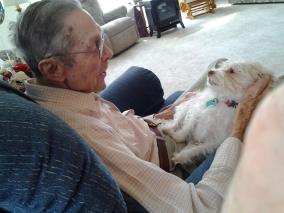 A moment of mutual adoration–Dad and his granddog

A few months ago Bailey was due for some booster vaccinations.   A vet who had never seen him before came into the exam room to administer the shots. Opening the file, she saw the word “FEARBITER” highlighted at the top of the folder—a label that had remained on Bailey’s record since his first fateful visit to the clinic.   “When should we muzzle him for his shots?” she asked. “I really don’t think that’s needed,” I replied. “Bailey is not the same dog he was when he first came out of the animal shelter.”   The vet took my word for it and proceeded to inject Bailey in the scruff of his neck. He didn’t even flinch. Then my “boy” did something that made me burst with pride. He reached up and gave the vet a lick on the nose.

She immediately grabbed Bailey’s file, reached for her pen, and scribbled furiously. When she turned the folder so I could see it, a huge smile broke out across my face.   “Fearbiter” was obliterated, and in its place a new word was written in large capital letters: KISSER. I couldn’t have been more proud than if I was a parent watching my child cross the stage at commencement. That moment officially commemorated Bailey’s transformation. And it reminded me that it was no accident that God led Bailey to choose me to be his “mom.” 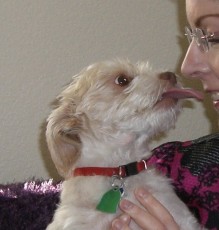 Bailey’s story taught me many lessons. I learned that negative behavior often has hurt and fear at its core. More importantly, I witnessed the transforming power of persevering love, gentleness and kindness.   I now realize that when God brings someone into my life that is exhibiting behavior that is difficult to be around, I need to be patient. The Creator isn’t finished with him or her yet—or with me. It’s possible that fear-biter may really be a kisser in disguise.

“There is no fear in love. But perfect love drives out fear.” 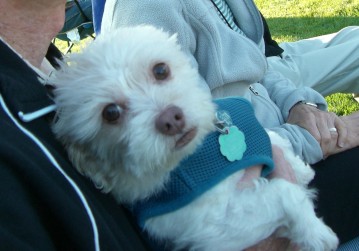 Bailey this summer, loving time on his “uncle’s” lap at a concert in the park.

To get the full story, please read Chosen, Part I first!

Our first visit to the vet was a disaster. Bailey trembled and huddled next to me in the exam room as we waited. The veterinarian entered and sat next to us on the padded bench. Though he spoke softly to try and calm Bailey, he was met with a growl and a flash of teeth every time he tried to reach for him.   The vet opened Bailey’s fresh medical chart and wrote in capital letters at the top: “FEARBITER.” The veterinarian never was able to touch Bailey that day. I drove home disappointed and confused. Had I made the wrong decision in adopting this dog? What had I gotten myself into?

Over the next few weeks I saw the same pattern repeat itself. Any time someone got too close to Bailey, especially a man, he nipped in response.   Things came to a head one day as we were walking through the neighborhood and two unleashed little dogs ran aggressively toward us. Not knowing what would happen, I scooped up Bailey to avoid a tussle. The dogs’ owner crossed the street to try and gather her wayward pets. As she came up behind me, Bailey transformed into a Tasmanian devil and wheeled around to try and bite her. In the process, he nicked my chin. . .the same chin he had kissed so tenderly at the animal shelter the day we met. Still carrying Bailey, I kept walking, my face bleeding. I could feel his heart beating wildly in his chest. My heart was pounding, too, and breaking. This was not the type of dog I had wanted.

That day added to the evidence that Bailey must have been seriously abused before I got him. Only he (and God) knew what cruelties he had endured at the hand of his previous owner. It deeply angered me to think of how someone could mistreat such an innocent animal. I knew I had a decision to make—take him back to the shelter, or stick with him. I decided to commit to Bailey for the long haul, choosing to believe that at his core he was not a vicious dog. I had no idea how long the road would be, but I hoped that the power of persevering love would help him overcome his fears.

Over the next few months, I continued to give Bailey a safe home filled with gentleness. My dad joined the mission during his routine visit every Sunday afternoon. While Bailey trusted me, my dad was another story.   I thought it might help if Bailey associated a man with good things, so I started having my father toss treats to Bailey every time he’d visit. Bailey would warily snatch the food, staying as far away from dad as he could. Gradually he started inching a little closer to grab the delicacy, but would never let dad touch him. A few months into the process, I added another element of placing Bailey on the couch between dad and me for brief periods, reassuring him the entire time. Bailey would stiffen up and press hard against me to remain as far away from dad as possible. Over time, I tried holding dad’s hand in mine and stroking Bailey’s back a few times. I could sense Bailey’s anxiety as he expected dad’s large hand to deliver pain instead of comfort.

Sometimes the progress seemed imperceptible, or would even take a step backwards. More than once dad said, “Do you think he’ll ever change?” Then one landmark day, eight months after adopting Bailey, something miraculous happened. 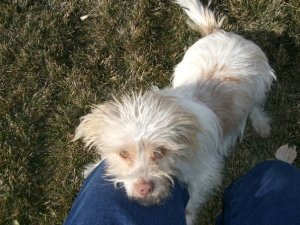 The day was finally here. After many years of renting, I owned my own home with a fenced yard and could bring a dog into my life again. It had been a long wait—three decades since my precious terrier-mix Dusty had to be put to sleep. I still kept Dusty’s little homemade ceramic grave marker, with the words “He truly was man’s best friend,” painted in gold.   The new adoptee would have big paws to fill.

As I entered the animal shelter, excited barking ensued as dogs of all sizes pressed their noses against their wire kennel doors.  I was on a specific mission – looking for a small smooth-coated, sweet-natured female dog I had seen two days before. I remembered she had been sharing a kennel with a whitish scruffy dog. I found her (or so I thought) still sharing space with the same muttly creature. “I’ll take a look at that one,” I said, pointing to the brown dog.

The animal shelter worker brought the dog into a private room so I could get to know her. Immediately I noticed something was different. For one, she was a he! And he wanted nothing to do with me, as exploring the room and piddling on the floor were his top priorities. I realized this was not the same dog I had seen before. I poked my head out the door and say “Um, this one’s not for me.”

With no other small dogs to choose from, I motioned to the bedraggled cell mate of the piddler. “I guess I’ll give that one a try,” I said. The door closed behind us and I sat down on the cement floor with my legs crossed. The pathetic little fellow surveyed me for a moment, then to my surprise, walked over and gingerly climbed into my lap.   I reached down and tentatively petted him. He was anything but appealing. Besides the odor rising from his body, he had a matted scraggly coat, a grease streak blazoned across his head, bare patches of skin on his legs and his face, and a strangely protruding lower lip. In short, he was downright homely. But as he sat there in my lap, I noticed his tense muscles began to relax. He looked up at me with hopeful brown eyes and gave me a quick kiss on the chin.   I realized this little guy, who didn’t even come close to the mental image of what I thought I was looking for, had chosen me.

I carried him out into the lobby area and held him on my lap. “He’s the one,” I said to the woman who had been assisting me. While we were waiting, an animal control officer entered the room. He told me how one of the City’s police officers had found my new friend foraging for food in a remote area of the county, where he most likely had been dumped. “How old do you think he is?” I asked. The officer gently reached down to check the dog’s teeth to help determine his age, and was met with a growl and a lightning-fast nip.

Something inside me said this was not a good sign, but I chose to shove the warning aside.   In a couple of days, the dog, who by then I had named “Bailey,” was officially cleared for adoption.   I brought Bailey home and introduced him to what I thought would be his “forever home.” Over the next few weeks I would begin to wish I had heeded the warning.

Continued in The Feartbiter (Bailey, Part 2). 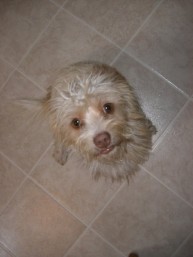 Bailey on his first day home