Apparently David Bowie did it.  The New York Times reported on January 11, 2016 that the rock icon “died peacefully.”

In fact, I’ve noticed that the phrase “died peacefully” crop ups up frequently in eulogies and obituaries.  “John Doe died peacefully, surrounded by his family.”  So perhaps it shouldn’t have taken me so off-guard when someone leaned in and probed, “Did your dad die peacefully?”

I stood there dumbstruck, unsure how to answer.   I had just come through a grueling nine days of bedside vigils.  I wasn’t sure what the intent of the question was – did he want to know whether my dad looked serene at the actual moment of death?  Was he grasping to find out if my father’s dying process was comfortable and “easy?”  Was he somehow trying to ease the sting of his own grief by receiving an affirmative answer?

Vivid mental images of dad’s final days replayed in my mind, and I winced internally at the sight of him grimacing in pain and pulling at the wires and IV’s attached to his emaciated body.  While it’s true that his suffering seemed less intense when he transitioned from the hospital to the local nursing home for end-of-life support, we quickly learned that the velvety-sounding “comfort care,” was still no bed of roses. 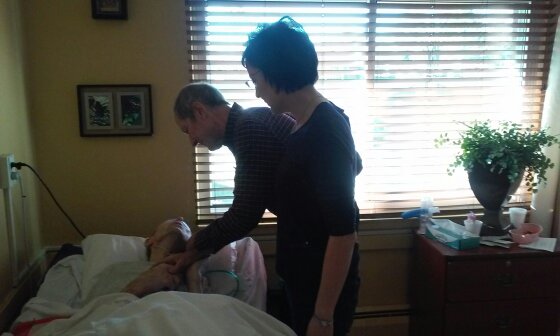 Visiting dad in his end-of-life room

“Comfort care,” (where treatment ceases and only measures to ease suffering are provided) is not an exact science and does not guarantee zero pain or distress.  My brothers and I had to remain hyper-vigilant to try and ease dad’s final passage.  We constantly summoned the nurses and aides to give dad more pain medication or reposition him.  We frequently moistened his parched lips.  We held his hand, played soft music, sang and read to him, and continually assured him of our love.

Mercifully, our journey through the valley of the shadow of death contained tender moments along the way. Though dad couldn’t speak, he communicated periodically through his eyes, facial expressions, hand squeezes, and kisses.  We even smiled and laughed when his “granddog,” Bailey, licked his face and dad wiggled his tongue in response.

A precious kiss from dad

Yet there was nothing inherently peaceful about the dying process as we watched dad’s body deteriorate.  In the midst of the descent, I remember exclaiming, “Death is not for sissies, and neither is watching someone die.”   My cousin, a mother of five, described it well when she said, “We come into the world with pain and struggle, and we leave it the same way.”

This wasn’t my first time watching a loved one slip away.  Almost eight years earlier I sat by my mother’s bedside as her lungs filled up with infection from a MRSA pneumonia.  Being with my mom during her final hours helped prepare me for what lay ahead with dad, even though his physical circumstances were different.

It also helped to talk to the physician about what to expect as death gained the upper hand. He gave us a pamphlet published by Hospice that outlined some of the behavioral and physical changes we might witness as the end drew near.  On dad’s final day, when he lay virtually unresponsive, I wasn’t as shocked by his altered appearance.  But it wasn’t pretty.

After watching both of my parents’ bodies give way to the ravages of death, I can confirm that the “peaceful” end-of-life scenes portrayed on saccharine TV shows are far from reality. While the physical manifestations of death and levels of suffering differ in each case, the dying process in its very essence is a mortal war.  I saw dad’s body battle to keep his heart beating and his lungs compressing air far longer than I ever imagined possible.

So to answer the question, “did he die peacefully?”  I must say “no.”   But did he die in peace?   ABSOLUTELY.

And that’s the key.

Dad was in peace for four critical reasons.

1)     He knew he wasn’t alone.  One of the greatest fears humans seem to have is the fear of “dying alone.”   This fear seems especially prevalent among singles, some of whom  desperately search for a mate for fear of reaching the end of their lives “alone.”   As a widower, Dad did not have his spouse by his side.  True, my brothers and I were with him for many hours, but not all of them.  Nurses and aides frequently checked in, as well, but in reality, dad was physically “alone” for a fair portion of his journey, especially at night.   Yet he knew he was not truly alone.  Dad rested in God’s promise to never leave or forsake him (Hebrews 13:5).  As the shadow of death hung heavily, his Great Shepherd brought exactly the comfort he needed (Psalm 23:4).

2)     He knew it wasn’t the end.  While dad realized that his physical body would soon return to “dust,” he was confident that his soul would live on.  He was free from the despair many feel because they believe their brief earthly life is “all there is.” Dad believed that his final breath marked not the end, but the beginning of an infinite future far greater than he could ever imagine.

2)      He was at peace with his Maker.  Dad accepted Jesus Christ as his savior at age fifteen and devoted the rest of his life to honoring God.  He knew that Christ’s death paid the penalty for his human shortcomings and opened the way to eternal life.  Dad rested in the assurance that his entrance into heaven was secure, not because he was somehow “good enough,” but because of what Jesus did on the cross.

3)      He was at peace with man.  Dad left no unresolved human conflicts or important things unsaid.  His children knew that he loved them unconditionally.   There was no need for “deathbed confessions” or teary reconciliations.  His conscience and heart were clear.

Dad’s peace with God and man empowered him to die with dignity and grace.   He exhibited no fear, regret, or anger as he faced the end.

This was especially evident the night before dad entered the hospital for the last time.  He had just finished dinner in the nursing home and I pulled out his favorite hymnal.  We sang a few songs, including “Faith of Our Fathers,”  which ends with the phrase, “I will be true, to thee, till death.”

We then entered into what I consider a very holy moment as Dad began to speak prophetically, seeming to know that his earthly time was limited:

“I don’t have a desire to be here very long.”

“My time is near.  I will trust Jesus all the way.”

“I will ever trust Him until He calls me home.”

Dad praying in the hospital

Somehow I wasn’t surprised the next day when I received the call that dad was being sent to the hospital with a sky-high white blood cell count.  Soon after I arrived at his bedside, I saw him fold his hands in prayer, and whisper words of trust and praise to God.  I then had the privilege of hearing him sing for the very last time, as the faint melody of an old hymn competed with the noise of the hospital monitors:

“Living for Jesus, a life that is true,   striving to please Him in all that I do;

Yielding allegiance, glad-hearted and free,   this is the pathway of blessing for me.”

A little over a week later heaven welcomed dad home.   As I reflect on his final days, I realize that my father taught me one last powerful lesson:  while the physical process of passing away may not be easy, the key to dying in peace is to place my trust in Jesus, both in life and death.

I love you and miss you with all my heart, daddy, but I’m so thankful that your suffering is over and you are experiencing inexpressible joy in heaven.  Thank you for being an example of how to live and die well.  Give mom a hug for me.  In the sweet by and by, we shall meet on that beautiful shore.

Verses of victory over death!

“For God so loved the world, that He gave His only begotten Son, that whoever believes in Him shall not perish, but have eternal life.”  John 3:16

“For the wages of sin is death, but the free gift of God is eternal life in Christ Jesus our Lord.” Romans 6:23

“ . . .if you confess with your mouth Jesus as Lord, and believe in your heart that God raised Him from the dead, you will be saved.” Romans 10:9

“Yea, though I walk through the valley of the shadow of death, I will fear no evil: for thou art with me; thy rod and thy staff they comfort me.”  Psalm 23:4

“Do not let your hearts be troubled.  Trust in God; trust also in me.  In my Father’s house are many rooms; if it were not so, I would have told you.  I am going there to prepare a place for you.  And if I go, and prepare a place for you, I will come back and take you to be with me that you also may be where I am.”  John 14:1-4

“He will swallow up death forever.  The Sovereign Lord will wipe away the tears from all faces.” Isaiah 25:8

“When the perishable has been clothed with the imperishable, and the mortal with immortality, then the saying that is written will come true: “Death has been swallowed up in victory.  “Where, O death is your victory, Where O death is your sting?” I Corinthians 15:54-55

“ . . . our Savior, Christ Jesus, who has destroyed death and has brought life and immortality to light through the gospel.” 2 Timothy 1:10

“Now the dwelling of God is with man, and he will live with them.  They will be his people, and God himself will be with them and be their God.  He will wipe every tear from their eyes.  There will be no more death or mourning of crying or pain, for the old order of things has passed away.” Revelation 21:3-4

“Then death and Hades were thrown into the lake of fire.” Revelation 20:14