Lately I’ve been DVRing multiple episodes of TV shows in a row. I recently got hooked on the home improvement show, “Fixer Upper.”  Now in its fourth season, I had never seen it until a few weeks ago. (I didn’t discover Downton Abbey until its fourth season either—what’s up with that?)  But I digress.

Each episode of Fixer Upper draws me into the thrill of watching Chip and Joanna Gaines transform a dilapidated, outdated house into a show-stopper worthy of a cover on Better Homes and Gardens.  In the process, I’ve learned a lot about the latest trends in decorating.  (I confess, I had never even heard of shiplap before!) 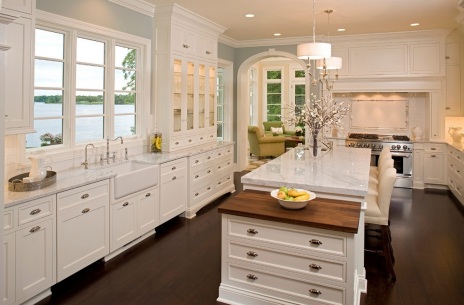 There’s only one problem. When I turn off the TV and look around my house, dissatisfaction creeps in.  I notice the outdated color pallet, the so-yesterday oak cabinets, and the cheap countertops.  I begin to envision what my little fixer-upper could look like if Chip and Jo got a hold of it.

But my life’s “reality show” will not include a visit from the Gaines’. Even if it did, I know that the results wouldn’t bring me lasting contentment.

You see, I actually had an unexpected “extreme home makeover” ten years ago when my house burned down. In one fell swoop everything had to be replaced, from the carpet to the couch to the carrot peeler.

My home felt shiny and modern when I finally moved back in. But a decade later, my dishwasher is groaning, the sinks are scratched, and the home décor feels dark and heavy.  While upgrading to the latest trends might bring me temporary gratification, I know it wouldn’t be long before something newer and better was dangled in front of my eyes.

This principle applies to more than just home remodeling. We’re tempted to pursue the latest in electronic gadgets, fashions, cars, jobs, churches, even relationships—all in hope that they will make us happier. While they may bring short-term highs, eventually we find ourselves wanting again.

It reminds me of the 1965 song performed by the Rolling Stones, “Can’t Get No Satisfaction.”

In the midst of a world that constantly reminds us that we don’t have enough, is it even possible to find long-term satisfaction?

Yes— if we go to the One who can truly meet our hearts’ desires.

There was once a woman caught in a cycle of dissatisfaction.  She had been married five times and was in a relationship with a sixth man.  Then one day, in the midst of doing her daily chores, she met someone at a well.

He asked if she could do him a favor and draw him some water.  As they continued chatting, the conversation quickly moved from satisfying his parched throat to something deeper.  The man described himself as the living water, and stated, “Everyone who drinks this water will be thirsty again, but whoever drinks the water I give them will never thirst. (John 4: 13-14, NIV).  The Samaritan woman’s life was changed forever after her encounter with Jesus.

This principle was repeated again soon after the miracle of feeding the five-thousand (John 6:1-13). While the people were still marveling at how their physical needs had been met, Jesus turned the focus to the spiritual realm.

He claimed the ability to give them lasting satisfaction, stating: “I am the bread of life. Whoever comes to me will never go hungry, and whoever believes in me will never be thirsty.”

Why does belief in Christ satiate our souls?

The seventeenth-century mathematician Blaise Pascal is often referred to as having said that everyone is “born with a God-shaped void in their hearts.” His actual quote is even more eloquent:

“This infinite abyss can be filled only with an infinite and immutable object; in other words, by God himself.” [Pascal, Pensees #425]

The contemporary song, “The Cure,” echoes the same sentiment:

“Only you can satisfy us, fill up the void inside of us, You are the Cure.” (Performed by the band, Unspoken).

When we invite Jesus to be our Cure, we access the living water and bread of life that eternally satisfies.

The infinite abyss becomes permanently filled with the grace of God.

Life will inevitably still include circumstances that tempt us to look elsewhere for fulfillment.   But as we grow in our relationship with Christ, we can proclaim, “I have learned the secret of being content in any and every situation, whether well fed or hungry, whether living in plenty or in want.” (Philippians 4:12, NIV)

It’s not wrong to want a nice kitchen with the latest color scheme, granite countertops, and tile backsplash, but when it comes to finding ultimate satisfaction, Jesus is the answer.

5 thoughts on “Can’t get no satisfaction”