The luncheon after my uncle’s graveside service was winding down, and the cameras were coming out. “Let’s get a picture of all the first cousins,” I suggested. As we lined up, someone motioned to a middle-aged woman across the room to join us.   “Whose cousin is that?” I asked, “She’s not my cousin.”   Sure she is, that’s Joanie,” another cousin said.

As the woman came closer, she smiled and I clearly recognized my Uncle Bob’s countenance in hers. “Of course,” I said sheepishly.   I guess I shouldn’t feel too badly—I don’t think she would have known me, either, had we passed on the street. I can’t remember the last time I had seen Joanie in person—it had been decades. My mental image of her as a pretty little blond girl was long outdated.

I was born into a large extended relation, with thirteen children in my mom’s family and seven in my dad’s. From these siblings came my dozens of cousins, literally. I have fond childhood memories of playing with my cousins in our small rural community. I always looked forward to going out to their farms, especially if they had horses. I grew very close to one cousin and considered her a best friend. 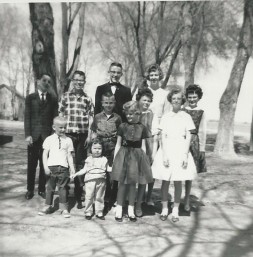 A few of my many relatives. (I’m the little gal in the front row.)

Holidays were a time of epic family togetherness. Every Christmas, my mom’s side of the relation would rent a local hall to accommodate our massive potluck gatherings. Santa would always show up and miraculously have a gift for everyone in his bag. In the heat of the summer, our large clan gathered under a picnic shelter by the river and devoured plentiful German delicacies.

Everything changed when I was in second grade.   My dad had been fighting severe allergies for years, exacerbated by his career in farming. With both of my brothers now out of high school, my parents decided it was the right time for dad to change occupations —and climates. They chose a radically different environment . . . far away, in a place called Oregon. That spring we hooked a U-Haul trailer to our old blue pick-up and began our trek west. Tucked away somewhere in the boxes was a cottage cheese container I had filled with gravely dirt from our yard. It was my way of taking along a little piece of the only place I had ever called “home.”

Over time, we adjusted to our new life among the rain-soaked evergreens. After a stay in a tiny dark apartment, we moved into a modest ranch-style house on a street lined with pink flowering crabapple trees. Dad started a new career at the ground-level of a growing company. I settled into school, and met my new best friend, Sandy. My mom, although she missed her eight sisters, seemed to enjoy her role as a homemaker in quiet suburbia.

We occasionally made the long road trip back to our original state to visit relatives, but it felt less and less like home to me as the years passed. My mom and dad, on the other hand, still maintained a deep connection to their birthplace.  After dad’s retirement and over twenty years in Oregon, my parents moved back “home” and built a new house in the country.   I remained in the Northwest, developing even deeper roots as a staff member at a phenomenal Christian camp and conference center.

As my mom neared eighty, her health started to decline and I began to feel the internal nudge to move closer to my parents. After two years of wrestling and praying about it, I finally felt the release to relocate.  I shed many tears as I prepared to leave friends and co-workers that had become like family.  Yet, I also felt a tinge of excitement about living closer to blood relatives again. Nostalgic memories painted an idyllic picture in my mind of what it would be like to live in the same town with cousins, aunts and uncles again.

When the transition finally happened, I felt encouraged when several relatives arrived to help unload my moving truck. “This is great,” I thought. “Today marks the beginning of re-connecting with my extended family.”    In the years to follow, however, reality turned out to be quite different than I imagined.

Read the conclusion in The Cousin Conundrum, Part 2.

2 thoughts on “The Cousin Conundrum, Part 1”